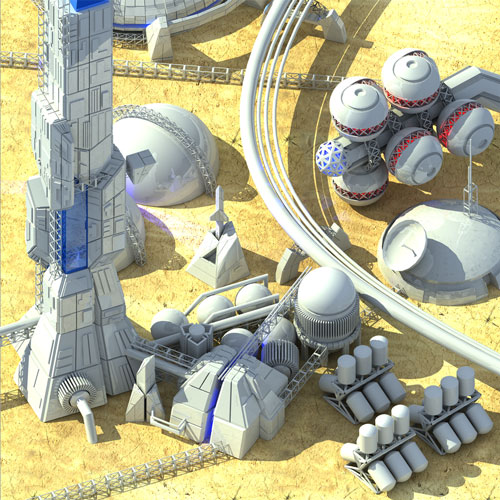 Lively colors on a scrolling background.

This is a sample of one background repeated a couple of times. Just to see the general art direction, high details of the objects, amazing reflections, and the evocative atmosphere. Since it's rendered to 2D it should run fine even on lower end machines. I'm safe to bet you haven't seen a shmup with this many details on PC in a long time. Even on consoles, if we don't count exploding cats shooter (?!) and overworks of old classics there really aren't that many of them.

Also there's the new tune of the game. Made by Dylan Barry.

This allows us to use really high renders for the game (this is like 2000 x 2000) with minimal impact on performance. I've created a neat tile manager. Say, you're on a boss and the things are really heated up. Does the background stop? How long does the background scroll? Until you beat the pre-boss. That's a nice repeatability feature that's possible any time in the level. Mid-level bosses? Hmm.....

Any jitter that might be observable is by recording software. Of course, you'll excuse that it's only one background. More coming soon tho.