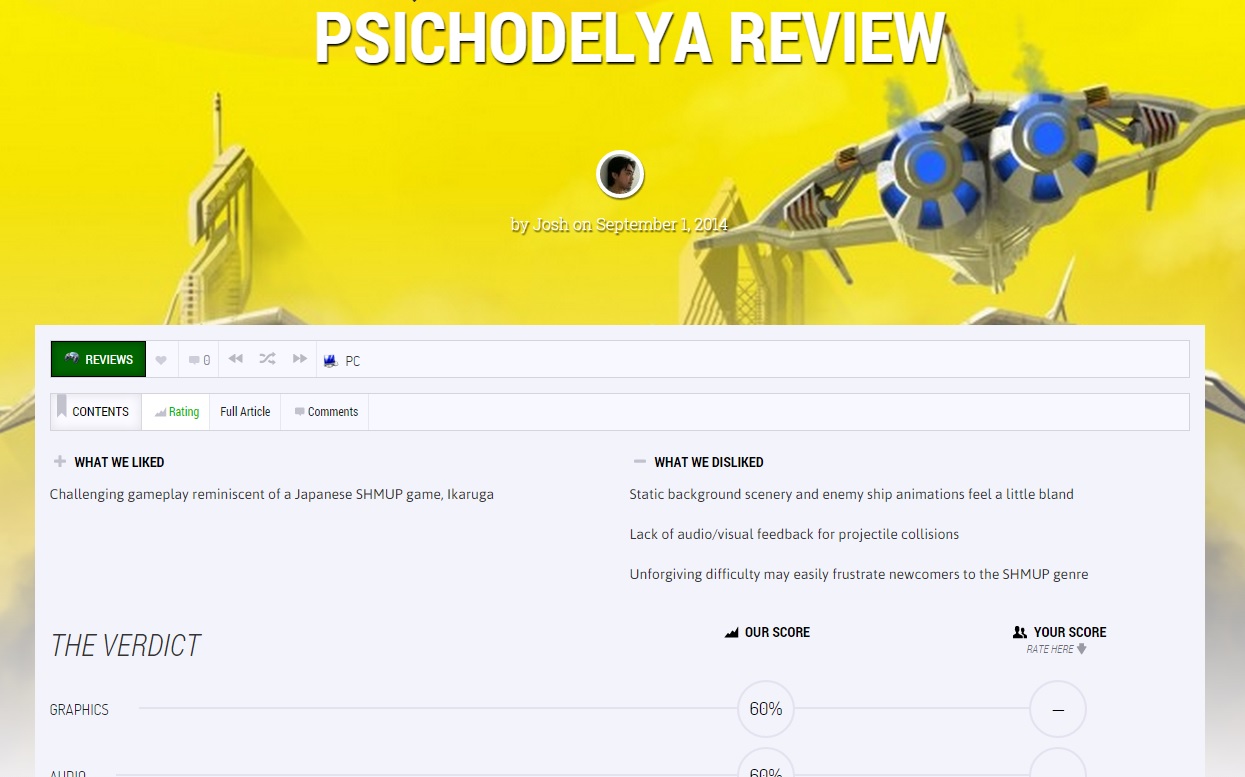 The first review of the first game you make is going to be at least almost difficult. 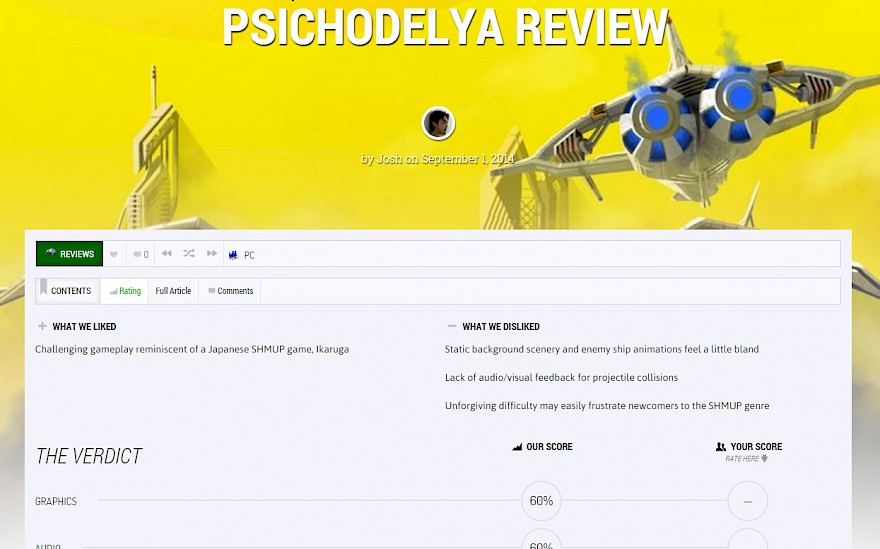 Well, here is the first review of our beloved game: http://mousenjoypad.com/reviews/pc/psichodelya-review/

First, I'd like to thank the reviewer for taking the time to review the game. That is always better then not having a review, even if the review is mildly negative. In the end we scored a humble 62%. I feel we could have gotten more, but it is what it is. I'd like to shed light on some aspects of the game, for my own relief and the benefit of the readers.

I like how the start of the review takes proper time to actually describe what the game is, as opposed to some more modern reviews where the game is described through the reviewer's subjective experience which may or may not say much about that the game is actually like. You may debate the subjectivity argument, but I have read thousands of reviews in the past 15 years and have played many of the games I've read about and the difference between the professional and a goofball is staggering.

If fancy and dynamic backgrounds are important for you in a shoot-em-up game, then you may find yourself less than awed with the art direction found in Psichodelya. While the background sceneries serve the game well enough, they are by no means particularly eye-catching, and are all entirely non-animated.

The first thing I particularly didn't agree with is the backgrounds are bland to adequate. I actually feel the pre-rendered BG is one of our stronger points, because most of the shmups don't offer this size, scope and details of the backgrounds. The non-animated point is true, and I did read that in a couple of places, but that was the point, partly, because the game is less demanding as the backgrounds are 2D and not 3D. The one thing I could have done better was the inclusion of ground enemies, while keeping this background style. That was a conservative decision on my part. Keep in mind that most other shmups pause the BG scrolling while the boss fight is in progress... which we don't!

For instance, while destroying a ship results in a large explosion and a numerical score displaying on screen, it would have been much more satisfying as well as if there were some animations of sparks or small fiery explosions whenever your shots connect with the enemy ship

That's one of the things I may actually correct in the near future. The point was keeping the requirements to the minimum, because every collision producing an effect increases the hardware requirements. But at this point I will probably implement it, along with the sound effects for collision.

Same point with the enemy depleting the player's shields

There is actually an audio queue here, but it's too silent. This will be fixed, never figured it a problem.

That's another decision I had to make. The game is hard enough as it is, and not being able to discern the bullets would have made the situation much worse. Our main inspiration game is guilty of this too, sometimes the bullet surprises you, and you're done. Here the bullets are in your sight at all times. Even very popular shmups are guilty of this. That's partly why the backgrounds have a level of blur to them (or the clouds above). Play-ability is primary.

Currently, Psichodelya retails on steam for US $6.99, whilst Ikaruga and Jamestown, two of the sources of its inspiration retail at a few dollars more ($9.99)

This is the biggest gripe I have with the review. There is a presumption that there can be only 1 shmup. Ikaruga, as a remake on PC has been played by every self-respecting shmup fan already. BTW, it does not support non-microsoft gamepad officially. Also, these "few bucks more" are actually 43% more.

I don't like the review didn't mention coop, online leaderboards or controls configuration (which in Jamestown have to be reconfigured on every game restart).

All in all, 62% is not a disaster because mousenjoypad are quite strict, but could be better, and I don't like the comparison with Ikaruga, because it's a classic game that does almost everything right. I really like the fact the reviewer liked the dynamism of the gameplay, even if finding it frustrating. The game is not that difficult, but there's a certain rhythm to learning the stage.