This is not an asset published through Unity Asset Store. This is a software built for internal use that we are inviting other teams to on individual basis. While unity and others have created competing solutions in the meantime, this is the only solution that allows this kind of safety on local servers, without paying for cloud services. If you are interested in participating, contact us.

Working with source control in a game development team has many complications compared to a regular software team. I wrote many articles on this topic (see website section), and they are meant as ideas and guidelines to ease this work. Here is the summary of typical setups I have encountered, related to source control.

So, what are the solutions to these issues? More than a year ago I wrote an article about a hypothetical DVCS that would allow for file locking on a global level. And while the idea wasn't great in retrospect, there was something to it.

Later I have for my own needs developed a set of procedures, and a code base to solve this issue. I have named this solution DVCS Asset Lock or DAL. First and foremost, it's a procedure and a set of conventions, that have been made trivial to operate with through provided Unity Engine Extensions. Second, it integrates with existing DVCS (currently Hg only) to reason about the status of files locking and automate steps. Third, it does not prevent the users from breaking the procedure in any way. If the asset is considered locked, nothing can prevent the user from actually changing that asset in true DVCS fashion. However, if such breaches happen, the procedure would regulate it at the time of changes integration (more below).


How does DAL work?

DAL presumes the team uses ES Flow with source control, a term and process I have coined and published on my site, which is based on gitHubFlow. I will list it here for convenience:

Our workflow has the following assumptions:

So, once this procedure is in place, the team members do all the work required inside Unity. They do so with Right click menu on the asset that they wish to operate on. 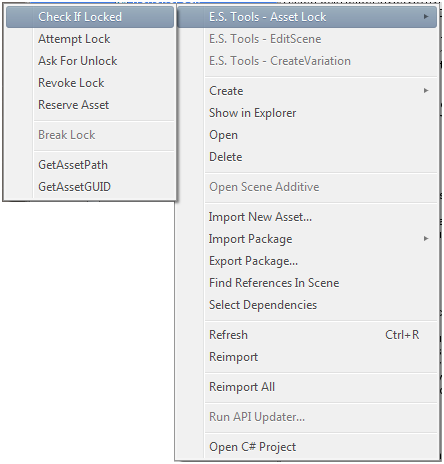 The fist 3 options are the part of the asset. There are a couple of components to it:

User Gru has asked for unlock of the asset at path:
'Assets/Tools/Editor/AssetLock/GetAssetPath.cs'.
The project in question is Project.

The asset at path:
'Assets/Tools/Editor/AssetLock/GetAssetGUID.cs' is now unlocked.
You get this notification because you subscribed to this event. Make sure to lock the asset first.
The project in question is Project.

As you may have seen, DAL is not a panacea. It does not prevent actual asset changes, but that is only relevant if users chose not to obey the procedure. Breaches of changes are handled by Administrator on case-by-case basis at the time of integration of a pull request.

It still requires some communication when it comes to editing scenes and prefabs in parallel, and users have to be aware they are working on the same things. In some circumstances, it may be beneficial to lock even these types of assets, which is allowed.

Currently only individual assets are locked/queried, folders and multiple assets are not supported. The web server with PHP and MySQL is required.

Currently only Mercurial and Windows users are supported. If there is enough interest, it is possible to expand the functionality to OSX and git users.