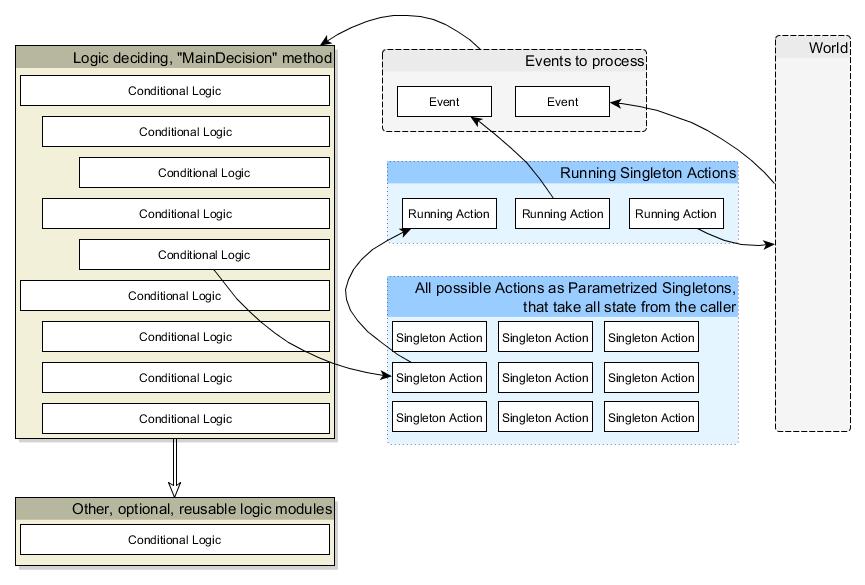 There are quite a few well known techniques in the modern world of AI for games. There are decision tress, finite state machines, hierarchical finite state machines, behavior trees, 2nd generation and event-driven behavior trees, goal oriented behaviors, goal oriented action planning, hierarchical task networks to name the most prominent ones in order of complexity. The decision which one to use comes down to weighting complexity vs. benefit, and the availability of libraries for some developers. I have been researching the topic recently and have decided to make my own AI model for fun and practice. It is not meant to be the best, most perfect thing ever, it is one solution to the problem. The major benefit is simplicity and speed in all aspects. What is it and how to do it? Read on!

Update 2018: The architecture presented here isn't inaccurate, but it is incomplete. Later I have created another model that is actually complete and works much better. No production code lais in the follwoing system.

DEAT stands for Decision Event Action Tree. It is based on decision trees model, with introduction of concepts of actions and events. First, let's consider the benefits over existing most popular solutions:

1) Drawbacks of FSMs and HFSMs:

FSMs have the ability to make the logic really convoluted when the number of states and transitions increases. It makes both the diagram and the code complex.
Most reasonably efficient implementations hold the transitions logic inside the states themselves, which makes one state responsible for knowing about all states which it may be connected to. Thus, changes to one state automatically draw potential changes to all other states. States are in this way coupled, and have a"code smell" of dependant objects.

Before starting, I want to say I have realized this architecture in code and it runs fine, however I am not using it yet on any commercial project.

Back to OwnerBase (I didn't call the actual classes like this, this is for ease of explanation). It has the following members:

7. MainDecision: this is the abstract method on OwnerBase, and it represents the logic for adding or cancelling running actions. It is important to note this logic will be invoked only on frames where we have unhandled events. This means refreshing the logic only where there is something new to decide. The events by any internal system may signal it's time to reprocess periodically even if there are no other changes.

This logic is written obviously in the same language as the rest of the system, which means there are no scripting languages, special node types or "compilations from GUI tools". There is also no Composite pattern anywhere. It's the same logic that we use for everything, the difference is we check the state of the world and agent and make decision to start (or even cancel) certain actions.

Since the signature of this method is like System.Action, any other logic may be called to internal or external methods (in which case the owner would have to be supplied). This gives the ability to have the shared logic even between AI agents with partially overlapping AI, something that I would call "AI Inheritance". The example would be having the same logic for a patrolling guard and stationary guard, without repeating most of the code. Those methods would theoretically take an owner and return a set of actions to the MainDecision. (Note: This is also possible for both FSMs and BTs.)

So, here's how it all works:

In any approach based on decision trees there is a bit of an issue with sequential actions. These could introduce a bit of excessive checking and state variables. There is one solution to allow only single actions and compose all actions that would be a sequence into one, but that would very much lower the reusability of actions. I have opted for another solution: OwnerBase has another dictionary of following actions. When we add the actions, we can also add the following actions to any action. When any action announces completion, we check the dictionary to see if there are any following actions to this action, and if there is then we immediately activate it and add it to the list of running actions. We have to be careful to empty this dictionary whenever we clear the running actions list.

Benefits of this approach: