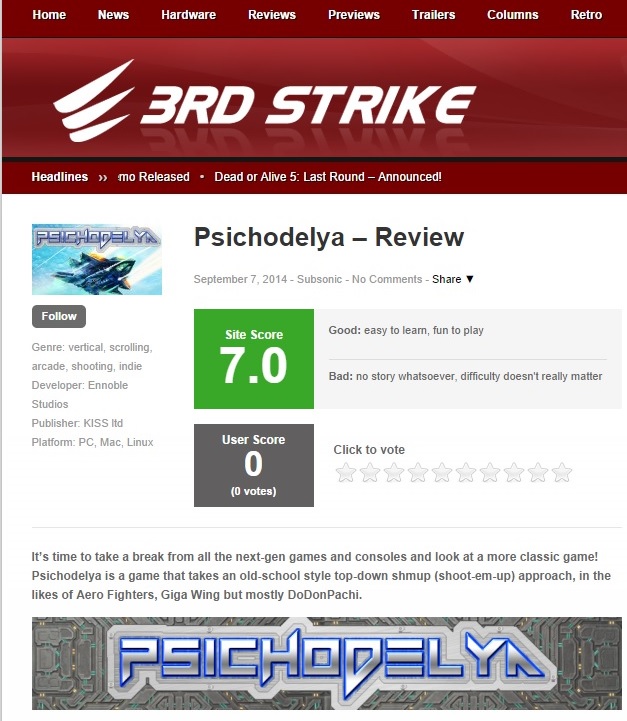 A favorable and fair review of the game.

Ah, second review of our beloved game, Psichodelya has been published on 3RD Strike.
http://3rd-strike.com/psichodelya-review/

The reviewer gave the game 7.0, which I guess is alright given that he found the game too difficult. The review itself is nice and descriptive, easy to read and respectful.

The lack of story is something that the game had to pay for because of unstable crew. In the GDD the story was supposed to be done via static sliding screens, not unlike the ones in Jamestown. I had some form of story in the back of my mind, however I never even asked anyone to create anything concerning story. I guess I could add something like that in the near future, but the story in shmups has traditionally been a joke.

I like the fact the reviewer liked the backgrounds, because without them the game would have been out 8 months before.

I also like the fact the reviewer found a nice descriptions for pickups, that is exactly what I was aiming at.

The reviewer found the game quite hard, and that's normal. The pace is the same on all difficulties, it's just the difference in how many mistakes you can make. Psichodelya was designed form the start as the game in which every enemy counts. Every killed enemy really is progress made, rather then being a pavement until the boss.

Psichodelya is a welcome addition to the genre.